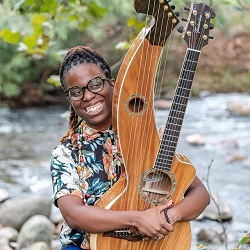 Please note that all ticket purchases are per table.  No individual seats sold.

“Williams’s music transcends the standard idea of what a guitarist should do.” - NPR Music

Yasmin Williams is an acoustic fingerstyle guitarist with an unorthodox, modern style of playing. Her music has been commonly described as refreshing, relaxing, and unique and has been called some of the most imaginative guitar music out today.

Williams has won various local talent shows, was a finalist in the Rolling Stones Young Gun guitar competition, was the grand prize winner of New York University's Ultra Violet Live talent show, and won the gold prize in the instrumental category of the Mid-Atlantic Song Contest.