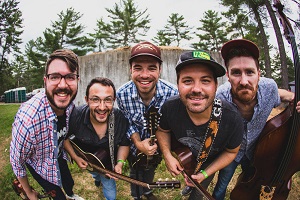 Please note that all ticket purchases are per table.  No individual seats sold.

“Boston band Grain Thief distinguish themselves from the legions of fresh-faced East Coast kids packing mandolins and banjos, in that they use vintage Americana rather than emo or corporate American Idol pop as a springboard for their songs. And they tell some great stories, and have serious bluegrass chops.” New York Music Daily

According to the Boston Globe, Grain Thief’s acclaimed new album, “Gasoline”, “is the sound of a band getting its ‘grass on."